In the past, unless you were making a very specific style of beer that was intentionally hazy, like a wit bier, North Americans sought to make their domestic beers crystal clear, a sign of quality. However with the growth in the craft beer market, we are seeing more beer that is intentionally hazy and for a variety of reasons. So why all the fuss about hazy beer? Is my beer supposed to be hazy or is this another marketing ploy?  While beer haze is not harmful to your health, in certain instances it is certainly considered undesirable.  So, let’s get to the bottom of the haze craze and look at both the consumer and brewer side of the equation. 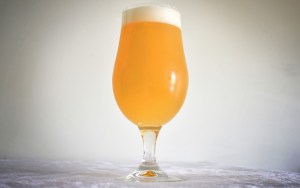 Is my beer hazy or am I just drunk?

Have you ever looked at one of your favourite beers in a glass and thought that it looks a little more cloudy than usual? Assuming your blood alcohol level wasn’t through the roof, chances are you weren’t wrong.  As beers age, they tend to become turbid and cloudy, and all beers will eventually turn hazy if stored long enough.  But in some cases, beer may become hazy sooner than they should as the result of processing issues or poor storage, generally an indication that the beer has spoiled.

Is my beer supposed to be hazy or is this another marketing ploy?

However many beers today are made intentionally hazy.  So how can one tell when a beer is supposed to be hazy? It really all depends on the style of beer as well as processing conditions. One basic and obvious principal is that if a beer isn’t filtered, it tends to be hazier because of yeast, cold break and other sediment which has not been removed during filtration. Traditional beer styles such as German Hefeweizens (In German, hefe means yeast, and weizen is wheat) and Belgian Witbiers (Wit is wheat in Belgian) are unfiltered and sometimes bottle-fermented, leaving a purposely hazy appearance. Other less commonly found filtered versions of these styles also exist e.g. kristalweizens. On the other hand, traditional Pilsners and domestic lagers are filtered and intended to be as bright and clear as possible. In both cases, aesthetics and tradition are some of the reasons behind this.

There are currently many different styles of so called hazy beer to choose from, ranging from traditional to new and emerging hybrids. Look no further than your local beer store, where I am willing to bet you your next pint that you will find an array of hazy New England IPAs (NEIPAs) to choose from. The majority of craft brewers tend not to filter their beers due to the potential flavour loss and for economic reasons (less time and equipment, less cost). Some brewers bottle-ferment their beer, but not all of these beers are intended to be served along with the sediment at the bottom of the bottle. I won’t bore you with a long list of which beer styles should be hazy. Instead, I will refer you to the Beer Judge Certification Program for a current guide of beer styles.

At the end of the day, whether or not you like a particular hazy beer is a matter of subjectivity. Knowing why your beer is or isn’t hazy will allow you to better appreciate the beer you are drinking. It may prevent you from disliking a beer because of its “unappealing” hazy appearance and may even have the opposite effect and encourage you reach for that hazy beer you passed on last time because you assumed that it was defective. At the very least, it will provide you with a conversation starter the next time you are sitting at a bar and also allow you to impress (or annoy) your beer drinking companions. 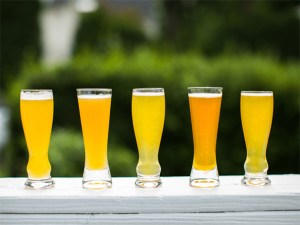 What causes beer to become hazy?

While unfiltered hazy beers are increasingly available and accepted by consumers, the majority of beers consumed worldwide are domestic lagers, by volume. These beers target a bright and clear, non-turbid appearance.  Breweries sometimes face challenges in achieving or maintaining that clarity, which can be frustrating for the brewer.  As mentioned above, haze can be attributed to yeast and other solids in unfiltered or bottle-fermented beer. But how do filtered beers become hazy?

Beer haze is a phenomenon caused by the oxidation of certain polyphenols (flavonoids) and their resulting interaction with proteinaceous material in the beer which form complexes. These compounds are originally derived from the malt and hops used in the brewing process. The protein-polyphenol complexes form hydrogen bonds to produce a non-permanent “chill haze” which forms in cool conditions and disappears when the beer is warmed. As more protein-polyphenol complexes form, these haze complexes further compound to eventually produce a more stable “permanent haze” through ionic bonds. This permanent haze will be apparent even when the beer is warmed.

Haze can also be attributed to other factors such as incomplete mashing, excess fobbing of beer and the resultant foam collapse, calcium deficiencies in the mash, or using malt that has not been aged properly.

As a brewer, is there anything I can do to prevent beer haze formation?

There are several ways to mitigate the formation of beer haze. One way is to control the protein content of the beer. Brewers can do so by selecting malts low in protein and nitrogen content, ensuring proper modification of malt, reducing the use of high protein adjuncts such as wheat, ensuring good boiling and whirlpool performance through proper pH monitoring and sufficient calcium additions, and utilizing kettle finings to form and remove trub.

Another way to minimize haze formation in beer is by controlling the polyphenol content. Brewers can do this by ensuring proper grain milling, optimizing sparge and strike water pH, temperatures and volumes, minimizing hop usage and/or maximizing hop extract usage or by using adjuncts or even hulless malts (although these are not widely available).

Other ways in which brewers can reduce haze formation are by ensuring cold storage and cold filtration of the beer, minimizing oxygen ingress during beer transfers and packaging, and using stabilizers during beer conditioning and filtration. If filtration is not an option, highly flocculent yeast and increased conditioning time will reduce hazes caused by excess yeast remaining in the beer. Proper sanitation practices should always be adhered to as bacterial spoilage can cause beer to become hazy as well as impart many other undesirable effects.

At the end of the day, there are several steps brewers can take to ensure clear, non-turbid beer and to maintain that clarity over time in both filtered and non-filtered beer. Consumers can also help mitigate the formation of haze in their purchased beer by storing it in cool conditions and most importantly preventing repeated temperature fluctuations.

Don’t hesitate to reach out to the staff at the CMBTC to discuss challenges, or offer perspectives and other ideas; we are always interested in hearing from you!  We can be reached through the staff listing on our web site at http://cmbtc.com/about/staff/ or thought social media on Twitter @candianbarley or Instagram @maltacademy